A first: nannee is up at the blue house with sleeping Dew Drop while Baldwin and Mindy make an appearance at party for Jason's graduation! Big thunderstorm in distance I am praying will come this way; while I was watering earlier, a huge thunderhead passed off to the East...we need rain! Lovely evening, planting flowers and planning on putting in tomatoes tomorrow - mulching and pulling out the last of the orange poppies.
There is a tufted titmouse knocking at the mirror outside on the wall of the house, in love with his reflection.
Posted by mary hayne at 5:09 PM No comments:

I am something without you 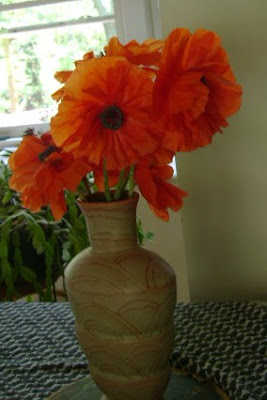 Been enjoying music in the Prius which Baldwin put together for me and Monday evening driving home from Qigong, i was singing along to "I am nothing without you." Well, it came to me, duh, that the song needed to be rewritten! like it is time to rewrite this song: "I AM SOMETHING WITHOUT YOU!" I'll bring the CD in and listen to it enuf to try to get more lines; right now I'm happy with this one change.
Posted by mary hayne at 6:11 PM 1 comment:

Lucky for me as i drove up to Andy and Susan's they were just backing out of their driveway and beckoned for me to park and hop into their car. We arrived in time to be ushered into the chapel at the McCoy funeral home (is it totally old fashion to say, funeral parlor?); but late enuf to be motioned toward the front of the chapel (Ann and Rick behind us). I was suddenly hit by a wave of sadness; was it the location, coupled by Harry's death made real? I began an internal dialogue with myself which was unsuccessful; I felt miserably unprepared, no kleenex - and the speakers were wonderful, with Ann's reading of the Galway Kinnell's poem to his wife, the most poignant. Tears. Of course, this is a funeral! We had only a few minutes before the next "celebration" for Patrick at the Unitarian Universalist church - immediately appreciated for the chapel full of light with trees and mountains out every window. And here was time with music and with Patrick's poems. and music. tears, ah - Chris gave me a tissue she had, only to need it back!
Home on my walk up to my son's blue house, I could better smile and cheer for Harry and for Patrick. I could scream out to the trees how much I wished they were still here and at the same time wish in the sky that their souls might gain strength for whatever further journeys. I could cry all I wanted and not feel ridiculously mournful.
And perhaps most appropriately I watched Robin Williams' WEAPONS OF SELF DESTRUCTION at Elizabeth's suggestion!!!!!!!!!!!!!!!!!!!!!!!! (Disneyland in China with Micky Mao - OMG I can't stop laughing).
Posted by mary hayne at 10:28 AM No comments:

being of the heaven 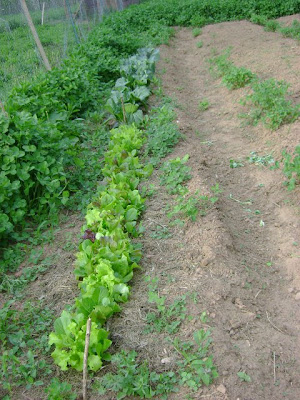 Sat on the deck bench looking down at the pond with two bowls: stir fried carrots, onion, asparagus from Mindy and Baldwin's garden and joi choy leaves from my garden in one bowl and salad of my lettuce mix, spinach, arugula, onion tops with blue cheese. ah! delight. Never mind that I also had a heavenly piece of Our Daily Bread's chocolate cake with raspberry jam in between layers at Beth's shower...I sort of covered the heavenly extremes from good for you heaven to devilish heaven. Watered the garden, potatoes coming up; i need to buy some tomato and pepper plants.
Posted by mary hayne at 4:26 PM No comments: