For several of the last years, it has occurred to me as I found a new calendar for my kitchen counter (choosing from the assortment of free nature ones from organizations I have been cajoled into donating to) that this whole New Years thing is arbitrary - what happened to the Aztec calendar - at least each day would have a name. I have an affinity to the Aztec world; almost every year I get into the habit (albeit short lived) of naming the day after something noticed, such as broad shouldered hawk over the chicken yard. Or two snake day. I fall into silliness or lose imagination after a month. I like the idea of a painting every day - or a poem. A poem a day got me through much of last winter - certainly some poems were only fit for wood fire fuel, but it was kindling to the rest of the day. I like the notion of making something of the day; it could be a meal as well as a walk. Anything from keeping the days from running away, as they tend.
My possibly deeper connection to the Aztec people is my past life as an Aztec warrior. This was the first life I connected with while doing past life regression; I felt my whole body changing into that of a large, muscled man (no, I didn't go so far as to feel that I had a penis). My family consisted of my twin as my wife and my mother and father were our children. I died by having my heart taken in sacrifice, my body rolled down the pyramid - it felt so very cold. I couldn't come up with a name while under hypnosis. When asked what I learned in that life, I said, "that you really can't hurt another." I sometimes dwell on what exactly I meant by that. I think that I am saying that we have to take responsibility for our pain, perhaps for our karma - I'm unsure. Perhaps, poppycock!
Heavy thoughts for the second to last day of the year; wintry mix out of the window, small piles of snow/ice in the grass, on the deck, in the crux of limbs.I told a friend on the phone, who on Pilot mountain got much more snow, that the snow here was just the crest of the waves.
Here are pictures of my day, new hoodie, new shoe day! A friend who takes qigong gave me a gift certificate to Fringe Benefit in Blacksburg; thus the hoodie; the shoes, I splurge on! 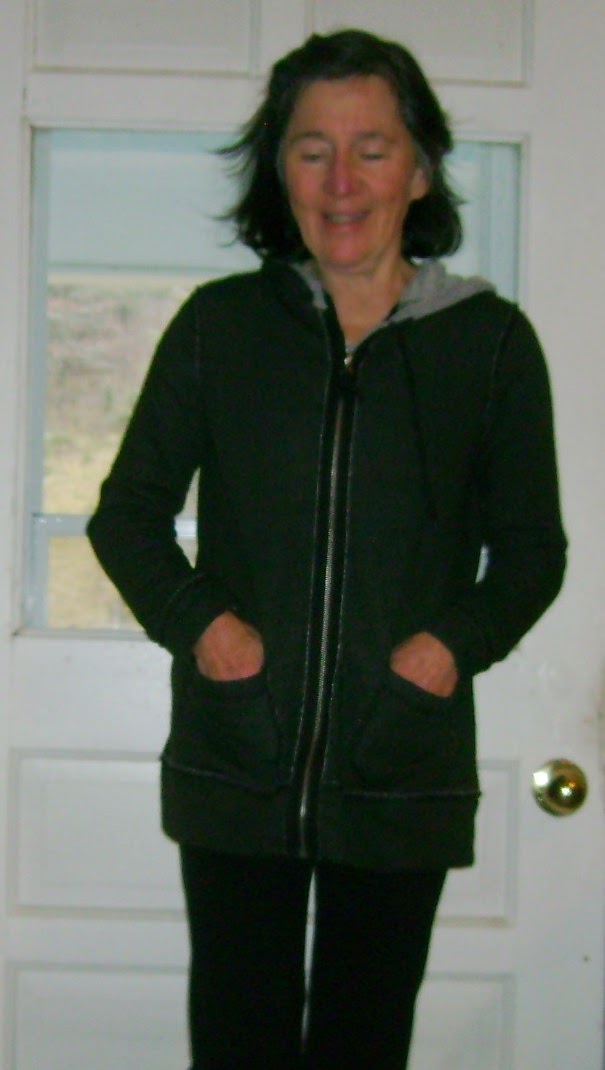 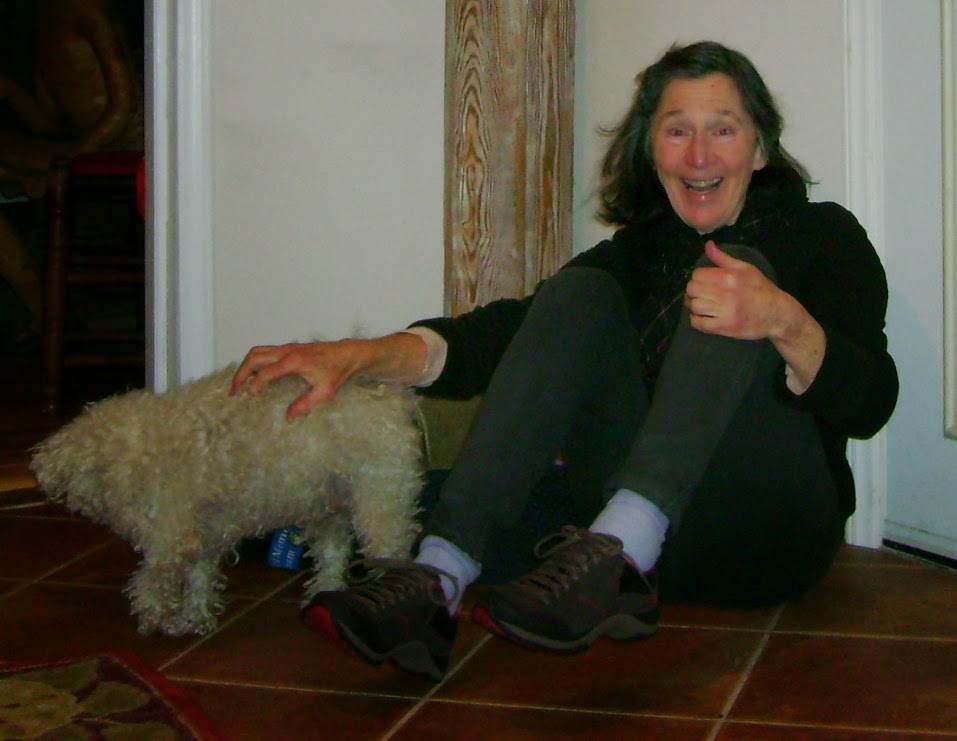 Posted by mary hayne at 5:08 AM No comments:

I count the days until the winter solstice, to pivot towards the increasing light. This weekend the Geminid meteor showers peak, and then but a week to bear darkness at 5 pm. The sleep has been very good, I can't complain - but my spirit drags about the evening. Delight is the morning as the crows kack  and caw the day up as I walk to the chicken coop.
I drove to Floyd with a friend to buy candied ginger for cookies; she bakes several batches of different kinds - they are delicious. I am toying with the idea of making ginger snaps; the smell alone is worth the effort.
Today I watched as Ezra and Jen unveiled Fia's Christmas present. By Skype, I saw Fia suddenly speechless as the kitchen was revealed. With glee she began to open every door, and there were a lot of doors: oven, washer, microwave and frig and I think another!  Jen had stocked some toy cans of food and a couple of pots. The little chef is now in business. 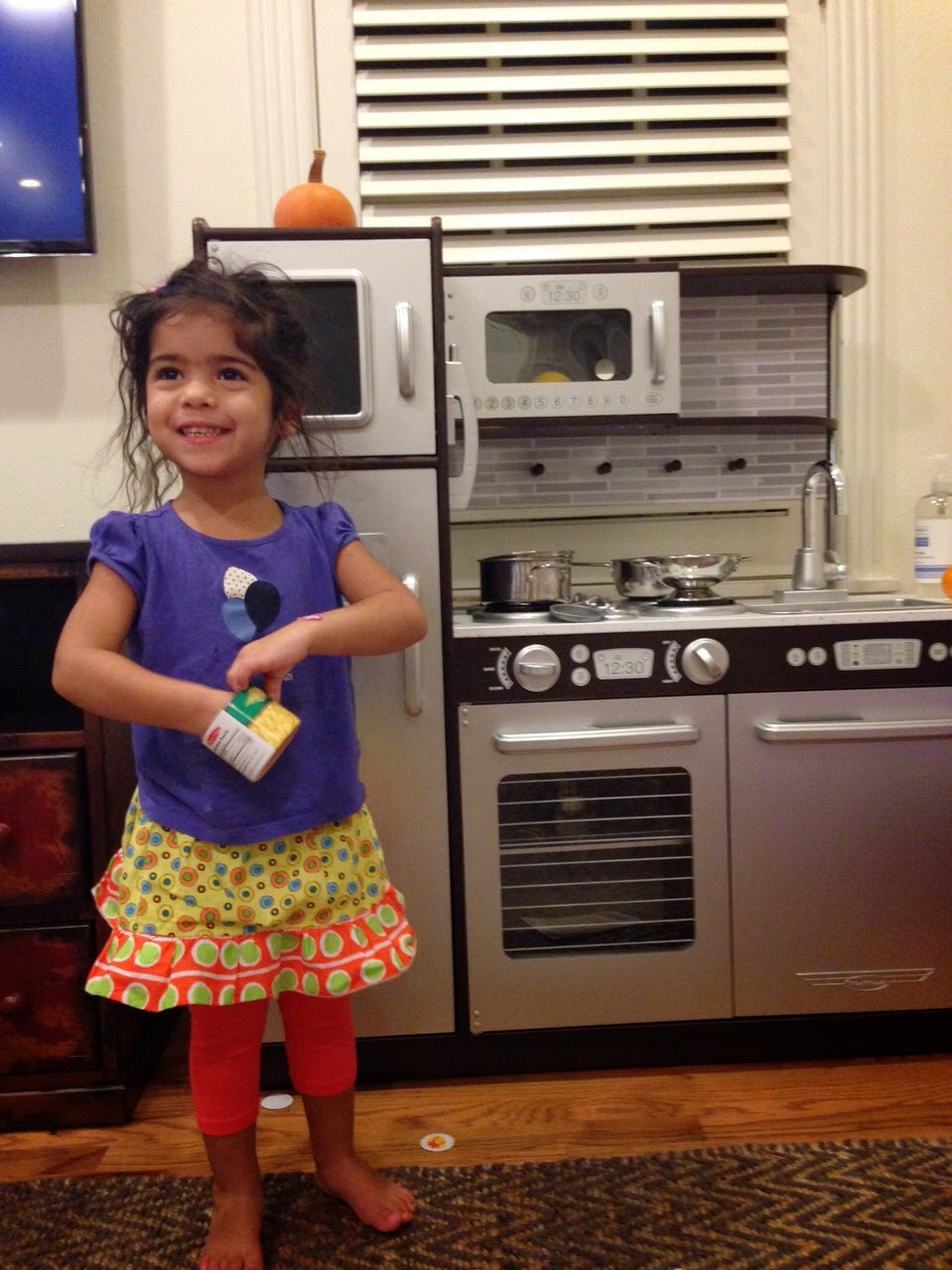 Posted by mary hayne at 4:00 PM No comments:

we Skype
I look at Pearl, she smiles her gap tooth smile
and I remember the lost teeth which remain in my heart's photo of her
the one I look at to say goodnight to,
and True, he's grown, such a sweet face, I want to touch. I am at a loss
for words, just wanting to look and look
until I can't consume enough of the flesh and bone
to turn away. 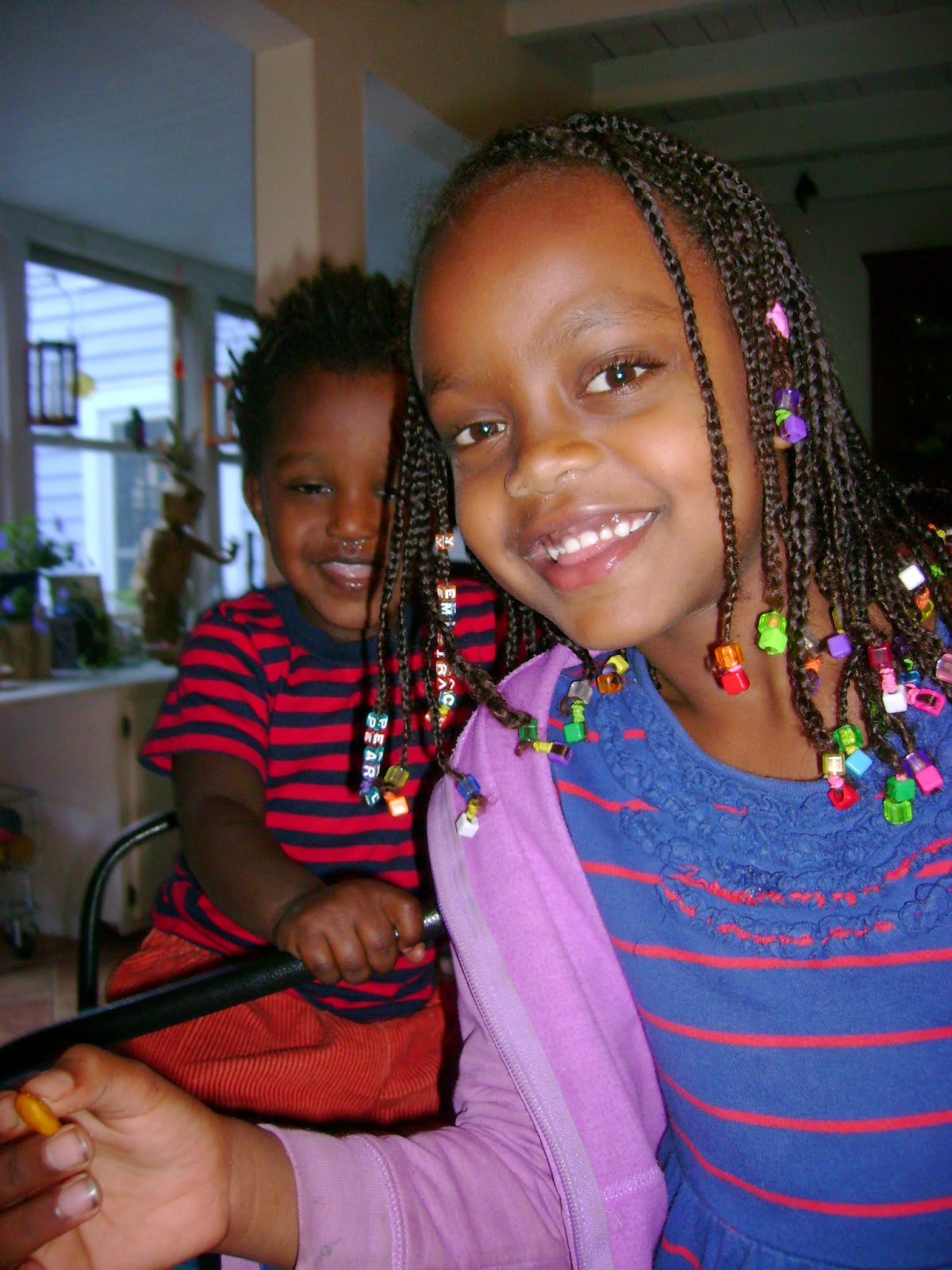 Posted by mary hayne at 8:30 AM No comments:

Some varmint, I'm thinking a racoon, pried partially open the small chicken door to the hen house. I heard wild clucking as I came to open the house this morning. When I looked into the darkness, all the hens and rooster were on the highest perch. Black hen (all black, even her beak and feet) was not in the corner on the floor; she is too heavy to fly up on a roost. I began a frantic count, peering thru the dim light. I counted again and again; I couldn't find the Americana hen - my youngest hen. Lotus' hen had survived a slaughter at her families house  and was given to me this summer. Lotus is the younger sister of a good friend of Pearl's. Lotus had made a pet out of the hen and was discovered eating chicken poo on several occasions (Lotus is only one). I found black hen in the yard clucking; I found Lotus' hen dead. Part of the wire fence was bent out; I guess the racoon or fox couldn't get the body out. The dead hen head was eaten and the neck, there was just a gnawing at the shoulders. I took the body to the pyre where I had tossed last months dead hen.
After talking with consulting detective and chicken affection-ado, Alma, it was agreed that racoon was likely culprit; she suggested baiting a have-a-heart with cat food and bracing the door shut tonight. Trap is set-up and I can use the shovel to brace the door shut. Here is a grim picture: 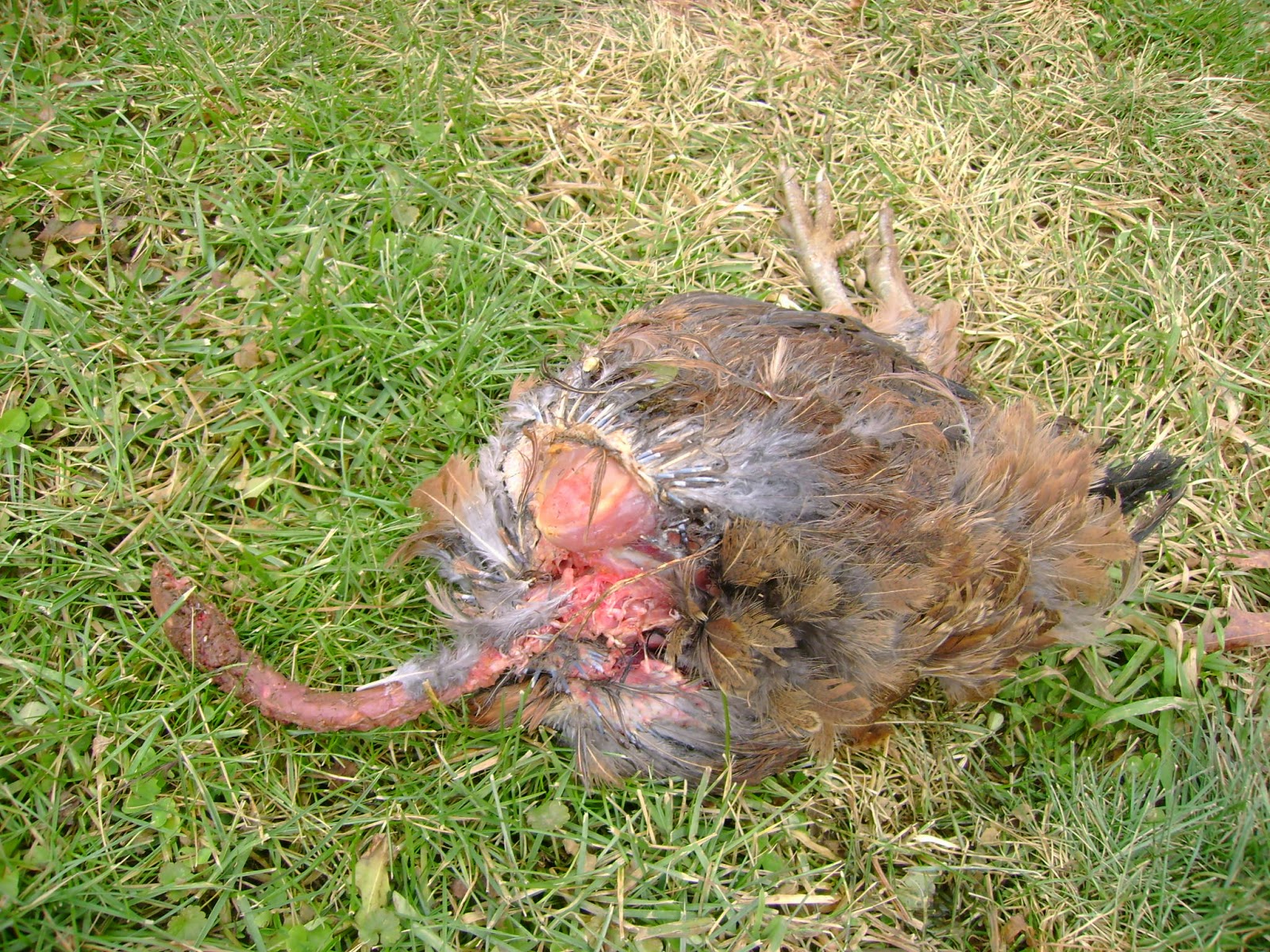