The Owl and My Eyes
I was sitting in a down stuffed chair;
Owl who had flown me to the chamber
high in the sky mountains, perched above me.
I felt comfortable, otherworldly comfortable;
a woman suggested, “let owl peck out your eyes,”
in a reasonable tone, and I complied.
“He will then defecate in the sockets, “ she added.
Of course, I thought, why not? All went black.
“Your sight will be more keen; your eyes more golden green.”
This was not a dream, but a journey by drumming.
The next time I visited the mountain chamber, I was strapped down
kicking wildly. I don’t know why
but I began to fight any suggestion at operation.
The third time, I was horrified to be bullied by a scientist
who wanted to shove me into an oven, “to warm my spirit!”
Much as I could use a little purification, the Nazi bent
was frightening and I began to doubt my reasons for shaman journeying.
Had I roused some mountain demons after my soul?
Or was this initiation for naive travelers who tamper with the cloud worlds? 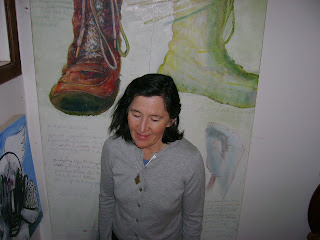 Woman Peeling Potatoes
for Sibylle Pearson
In the other room John is dying of AIDS
I slip another naked potato into the pot.
Outside the city could be Nevada
all I see these days is desert scrub unaware of my footsteps
unaware of the great monolith about to blast angrily underground.
The city doesn't seem to fucking care,
so I'm back working with “God's Love, We Deliver”
cooking potatoes for John who is homebound
is dying
while I burn like the center of the Earth
who knows creatures are setting firecrackers off
under her skin
as John knows.
I can't tell you how much I struggle to find meaning
just back from being arrested in a nuclear test zone. 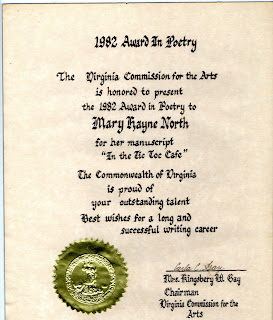