The day lilies are almost spent; and I regret, as usual, not having more blooming flowers for August about the house. My encore roses have failed to flourish as they seem to do for everyone else; the deer were rough on them and the horrid grass in the front of the house has starved many plants of nutrients and water. And then there is the gardenia on my deck blooming! I cannot complain.
I have nearly completed work painting my front deck, second one this summer. I have almost "enjoyed" the brush strokes, glopping on the thick medium to cover a deck neglected too long. And the repetitive task has been company to sad happenings which bother. Like my good friend's grandson who at just 5 has developed aplastic anemia. Or the sudden death of a wonderful man of the community - a man who was committed to social justice. A man whose death doesn't allow anyone who knew him to waste time mourning, but whose life prods at us to do more. To act when we see need.
And the heat today prompted me to join the floating world and follow Pearl to the river with tubes balanced on our heads. Little True in his own little inflated bloat tethered to his Papa's tube. Wonderful!

Posted by mary hayne at 6:34 PM No comments:

Labels: Activism, My Garden, The Hollar 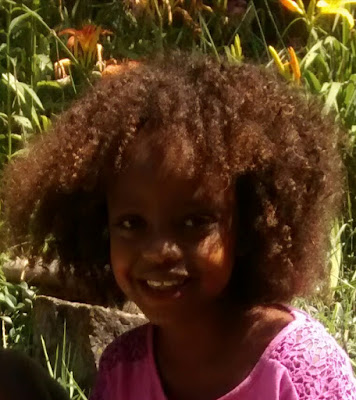 She's seven today, my first grandchild. And in celebration this morning, I finally got around to hanging my hummingbird feeder. But I celebrate much more in my thoughts: this lean, lanky cinnamon colored girl who has brought the world to me in ways I had not imagined. Her sensitivity and empathy stop me; I watch her crouch down to let her brother climb onto her back. Images of children all over the world with their baby siblings bound to their backs crowd my view. I ask her to set him down for the walk to the river; it is too long and he is almost 3 and old enough to walk on his own. She obliges, but as we walk she constantly turns her head to check his progress! He is soon leading us down the path and we laugh at his antics.
She has seemed precocious to me in everything from kicking a small soccer ball at 3, to learning to read before 5. She is a story teller extraordinaire; with at least 5 on-going sagas of families  whose names I struggle to remember. Now she is not only learning  Amharic, but is nearly fluent in Spanish since attending an international school in Dominican Republic in winters, where she studies French. And she plays piano. And she loves salads. And she makes cards for every occasion. And I am beyond proud to be her Nanee. 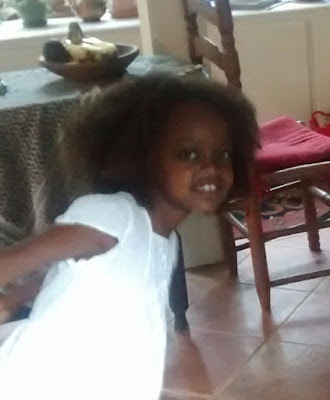 Posted by mary hayne at 5:57 AM No comments:

My friend, Mike Waterlond, taught me how to make enchiladas in my small kitchen in the house my husband and I rented while attending UVA graduate school. We made corn tortillas from scratch and a tomato sauce with a large can of tomato juice, a quart bottle of beer, along with chiles (the large brown dried ones and a can of jalapeños). Mike taught me that to cut the spicy heat of the sauce, you could add more salt. We dipped the tortillas into the cooked down sauce, placed the shell into a pan and added cooked sausage, chopped onions, cheese and black olives. When we had depleted the sausage, we stopped - there must have been 15 of them. As directed I spooned sauce over the lot and added cheese. They went into a 350 degree oven for 1/2 an hour.  Mike married Diane Wakoski a couple of years later; she had come to UVA for a year as poet in residence.
The batch of enchiladas that evening were so hot to the palette that only I could manage two.  I learned that evening that if you had unexpected guests just up the heat or hold the salt. Since then (40 years ago), I have amended the recipe: I now stuff store purchased tortillas with fresh vegetables from the garden. I still add olives and cheese. But if I don't have beer, I add Piri Piri spice. I use home canned tomatoes.  Diane divorced Mike, claiming he was gay. Last night's enchiladas contained zucchini, onions and swiss chard from the garden, red beans, Kalamata olives and sharp cheese. They were delicious.
Mike was the first person I knew fairly well that died of AIDS.  I hadn't heard from him in quite awhile; another classmate and close friend said that he had been working as a lobbyist in DC.  I think of him every time I assemble enchiladas or cook his Round Top chicken soup (which also contains a bottle of beer!).
Posted by mary hayne at 8:59 AM No comments:

trying to bait a poem!

new machine, new clean look, i hesitate to make my mark
gold finch at the feeder near the window
close enough that I am familiar with frequent visitors, a male
now sleekly golden, with bandit black crown, like a beret that his slipped.  the birds a distraction
i hadn’t sought this morning waiting for grandchildren to boom
into the quiet kitchen. and always, baiting a poem
from the pool of the sky. 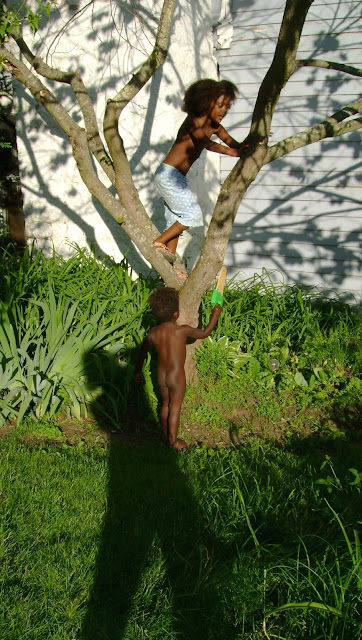 Posted by mary hayne at 6:38 AM No comments: 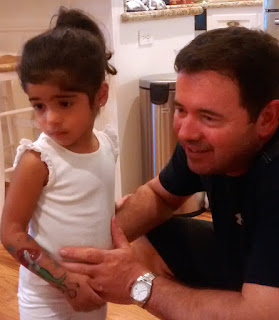 The beginning of June I visited Sofia and her people in Houston, between the rains! Jen was in Trinidad for the christening of her nephew for several days, then Ez was in Mexico for work. So I got to be with Sofia, swim time and book time, tea time with dolls and puzzle time, bath time and dinner time. Ez and I went out for sushi - and another night we walked to get boiled crayfish. The highlight of the visit was Fia's 3rd birthday party. Face painter, giant blow-up bounce princess house, piñata, beautiful cake, delicious jerked chicken Ez cooked - and we managed to keep the kids from the pool. I left Houston the day more rain via a tropical depression was due. But in Charlotte my connecting flight to Roanoke was cancelled and I had to spend the night (when Ez was texting me on my way down, autocorrect turned Charlotte into Cheap Otter!). 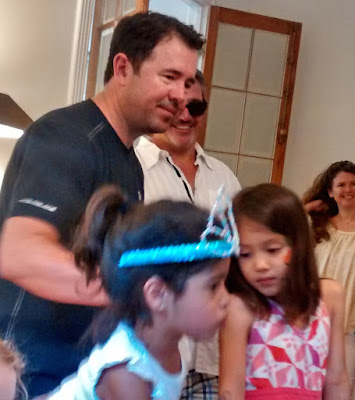 Posted by mary hayne at 6:21 PM No comments: