Waiting on the oil spill, waiting and praying that it dissipates in smoke, waiting as the wind turns wrong and pushes the blob towards the coast, waiting while attempts to plug the leak fail...hearing rumors that perhaps there was sabotage as it was so near Earth Day (no, how could anyone think that; oh, how could i forget "drill baby drill" folk). Thinking of the birds, fish, dolphins, shrimp (shrimpers allowed to start the season early), oysters - marsh, marsh creatures, beaches...boats.
Posted by mary hayne at 6:57 PM No comments:

Ezra and Jen's house is delightful, sunny with magical backyard. We walked the neighborhood yesterday and on coming home, I got the idea that one of the rock water pools would be a great gold fish pond. we got the rocks out and it is deep enough - now to get lotus and fish and fill it back up! Sharon helped rearrange sofa and chair in front room - and Sharon is sleeping! amazing - so good to see Ez and Jen and Kingsley.
and me the early riser, trying to not bother or arouse the tiny barker
Posted by mary hayne at 6:09 AM No comments:

some of spring still here in Ocean Springs, azaleas in that fushia and red blaze...stumped on the philosophical/psychological perplexity of why does Dadz fear death so much at his ripe old age of 89??? he won't talk of it. But the other night at the bar while he was talking to a friend who is 95, the friend suddenly turned a slight shade of blue - Dadz waved frantically at the rest of us paying no attention to the two old geezers until Ron a doctor came over and patted the old white haired man on the shoulder until he caught his breath. This old man at 95 is supposed to be on oxygen all the time, only he smokes with the mask on - or tries to!!!!!!! his wife died less than a year ago, and as he says, "he's ready!" Dad worried about his all the way home and didn't believe me when i said he was 95 and i heard it from his daughter! Ah, well, life sure can get a strangle hold on some.

beautiful afternoon for a hike around the mountain - red bud glorious. found hepatica which was bleached out, few blood root - wondering what i would miss going down to Ocean Springs, New Orleans and Houston end of April...spring still so frufru here and full blast there!
Baldwin cut the grass and the smell of mowed mint inspired me to make mint tea. grass clippings nestling plants in the garden and smothering the chicken poop smell in the coop...
Posted by mary hayne at 3:29 PM No comments: 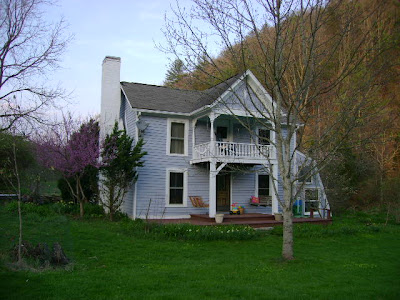 Posted by mary hayne at 7:02 AM No comments:

whatever is the protocol for being 65, i don't want to know it
denial seems an excellent stance
with homage to long walks and weekly qigong class.
whatever could be the dress code in the 21st century
i wouldn't know it
i'm an advocate of fun and comfortable
tho i can understand the temptation of the veil.
i like the sun before 11:30 and in the evening after 4
i find sleep rejuvenating if given several hours in the morning to muscle up my eyelids
I can laugh at the mirror more often than not.
Good food with good friends delights my spirit
grandmother hood keeps my heart in light
65 ain't near as bad as crossing into teen years.

Of course the head count isn't exact; but yesterday I counted 10 gold fish - today only 6. I'm getting more and hope that the bull frogs who I suspect are the cause of the diminishing amount will tire of the food. I found an undiscovered Easter egg yesterday after dinner and everyone had gone and then another this morning; and I was reminded of the rotten Easter egg in a crook of the magnolia in greatgrandmother's back yard on St. Charles. I've never hidden boiled eggs because of remembering that smell. Baldwin mentioned that he had heard that our lovely 80 degree weather was to end; I checked the forecast and wasn't too surprised to learn that he was correct: by Thursday highs will be in the 60's thru the weekend, more normal fickle April weather with thunder storms.

Posted by mary hayne at 1:17 PM No comments: